Reiki, pronounced “ray-key”, is a Japanese word that means Universal Life Energy. It is an ancient energy healing technique, which involves direct application of Chi by the “laying of the hands”. It is safe, gentle and intelligent – it goes where needed without being directed. Reiki works on four levels to heal the physical, mental, emotional and spiritual bodies by bringing in balance and activating the body’s own healing ability.

Dr. Mikao Usui is the founder of the Usui System of Reiki. He was born August 15, 1865 in a village in Japan. He was a seeker of knowledge and wanted to find out how it was possible to perform healing. He heard that believed going into a deep meditation would allow such explanations.  After meditating on Mount Kurama for 20 days, he was knocked unconscious by a light and gained insight on the system of Reiki. On his return from the mountain, he experienced five miracles that demonstrated his newly found healing abilities. He was not weak and tired after fasting, he healed his broken toe-nail and a woman’s toothache, he did not suffer indigestion after eating a lavish meal and he healed a bishop’s painful bout of arthritis. When he died, Mr. J. Ushida became president of “The Usui Healing System of Reiki Healing”. There were many successors and most recent in 1998 Mr. Kondo is the current successor in Japan.

Dr. Chujiro Hayashi, was a retired officer in Japan’s Naval Reserve and one of Usui’s sixteen teachers. After Dr. Usui transition, Dr. Hayashi established a clinic in Tokyo, which later grew into about eight successful clinics. On Tuesday, May 10, 1940 Dr. Hayashi decided to end his life because he did not want be called to duty in World War II and be responsible for killing many people. Before his transition, he passed leadership over to Ms. Hawayo Takata.

Mrs. Hawayo Takata was born on Christmas Eve 1900, in Hawaii. Her family was from Japan so she had to go there to inform them of the passing of her sister. While there, she became very sick and taken to the hospital. She was about to be operated on and heard a voice saying that the operation was not necessary. This piqued her interest and she was introduced to Dr. Hayashi. She was then healed and wanted to learn Reiki for herself.

Photo given to Iris Ishikuro. 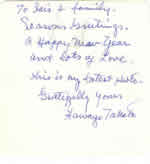 Inscription at the back of photo written by Takata to Iris.

Due to traditions in Japan at the time Dr. Hayashi declined her requests but with further persuasion he attuned her to level I, and later level II and finally level III (Reiki Master) after she demonstrated much dedication to practicing Reiki healing. Mrs. Takata eventually moved to California and around 1975 to 1980 she trained and attuned 22 Reiki Masters. Mrs. Takata passed away in 1980 and her daughter Phyllis Lei Furumoto was as her successor.